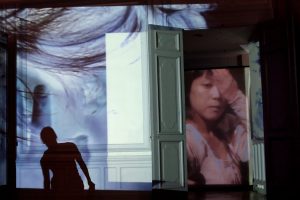 Echo Room questions the domination of the other and the structure of relationships between men and women.  The choreography draws on the dialectics of the body which is inherited and socially constructed on the one hand, and lived and free to make choices on the other. The uncontrollable is juxtaposed with the controlled and imposes itself like an echo of the past.

Echo Room deals with the simultaneous perception of various states of one given reality embodied in a man-woman relationship through the use of physiological sensors. It questions the relationship between movement, physiology and psychological structures through a danced duo to be experienced by the audience in three spaces.  Each space emphasizes either the live dance; the physiological reactions-interactions of the dancers through sound, shape and colour; or the mental space of the dancers through reactive sound and video. This is achieved by treating information collected by sensors attached to the dancers which measure their physiological reactions: muscular tension, breathing, and heartbeat which allows for another real-symbolic-past-future space/time interpretation of the dance that we see unfolding before us.

In the site specific version the audience is invited to circulate in three separate spaces, inside of a given location. In the stage version the audience can experience the three spaces simultaneously either in the house or around the dancers on the stage itself as images and sound are projected on screens suspended on stage and on the walls of the house.