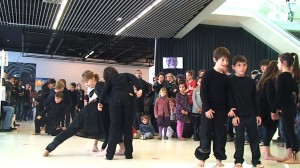 The k project, a “dance-multimedia” project supported by the “Grand Toulouse”,
as part of the “Jeunes e-Toile” project for and with children with the support of Toulouse Metropole in many cities and small towns of the Toulouse Metropolitan area, involving each year 3 community centers of 3 different cities, offering workshops, performance making and exchanges between towns, 2008-2018.

choreographic piece made by Anne Holst and Jean-Marc Matos with children from the cities of Colomiers, Mondonville and Cugnaux