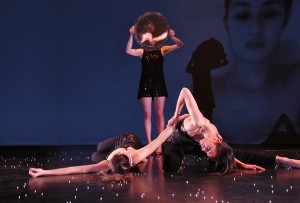 adaptable for any stage and site specific outdoor public space.

Recent presentations: in the context of CorpusMedia 2010,

Choreographic trio inspired by Hélène Cixous’ The Laugh of the Medusa and Australian poet Diane Fahey’s feminist poetry, Genesis 3:16 un-occults woman as a concept and exposes classical representations: women stuck in mythological stereotypes in the interest of power, women having to express according to dominant male discourse, women who cannot explore their black continent because “black is dangerous”. By associating dance, text, song, music, images and symbolic objects in a journey towards a feminine being-in-the-world, another vision is allowed to emerge.

Genesis 3:16 is part of a series of several recent pieces which deal with the theme of the relationships between the gender: Echo Room (2009), Nuit Ecran (2007), Lovely User (created for the Monik Festival, Odyssud, Blagnac, 2005).

With music, text and movement the performers embody these visions to give the audience an entertaining interpretation of the tensions between them.